The Contribution of Classical Novae to the Galactic Abundance of 26Al featuring Laetitia Canete (University of Surrey, UK) 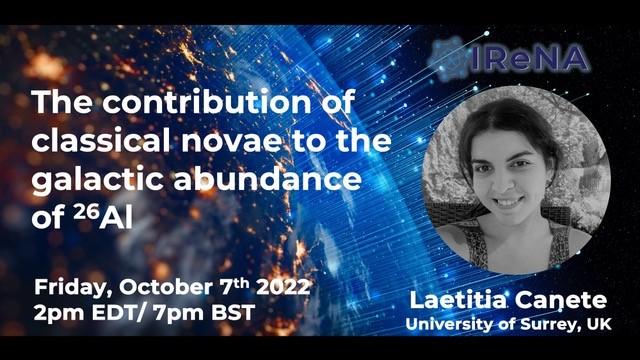 The discovery of radioactive 26Al via the observation of the 1809-keV γ ray in 1982 is one of the most famous pieces of evidence of on-going nucleosynthesis in the cosmos. The 26Al is likely to be produced dominantly in massive stars and supernovae. Nevertheless, a number of additional sources such as classical novae and AGB stars may still contribute considerably to the production of 26Al. Thus, up to 29% of the total observed 26Al abundance is predicted to have a nova origin.
The 25Al(p,γ)26Si reaction is a possible means of bypassing the production of 26Al in classical nova. However, the lack of experimental data has hindered the ability to accurately model the influence of this reaction in such environments.
In this seminar, I will present results which illustrate two complementary experimental domains: Mass measurement and γ-ray spectroscopy. In the 25Al(p, γ)26Si reaction, proton capture is dominated by resonant capture to a few states above the proton threshold in 26Si. The mass values of 25Al and 26Si have an exponential contribution to the total resonant proton capture rate in 26Si. The mass of 25Al was precisely determined via Penning traps measurements at the IGISOL facility of the University of Jyvaskyla, Finland. Additionally, a recent experiment at Argonne National Laboratory, USA was performed to identify the resonant states in 26Si, via their γ-ray decays, using the unique GRETINA+FMA setup. The results of this latter experiment agreed with a recent detailed spectroscopy study of the 26Si mirror nucleus, 26Mg in which evidence for a new l=1 resonance in the 25Al+p system was presented. However, despite an increase of the reaction rate at the low temperature range of novae, the final ejected abundance of 26Al from classical novae remains largely unaffected. Using these results in galactic chemical evolution calculation, the contribution of classical novae to the abundance of 26Al was estimated to be only 10% to the observed 26Al in the Galaxy.