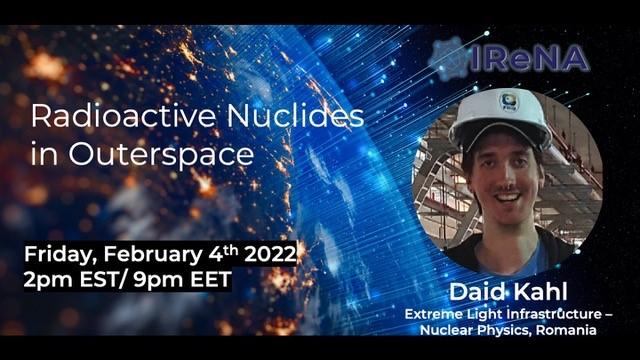 Abstract: Nuclear astrophysics is generally the study of the energy generation in stars and the origins of the chemical elements. In this highly multidisciplinary field, the job of experimental nuclear physicists is to constrain the nuclear reaction rates which are linked with astronomical observables. Observation of the lightest chemical element with no stable isotopes, technetium, in stellar spectra, was the first evidence that nucleosynthesis is an on-going process in our Galaxy.

While the Big Bang is the generally accepted origin of the Universe, the observed results of cosmological lithium from these thirty minutes of nucleosynthesis in the early, hot, dense Universe, remain discrepant with nuclear physics data by a factor of three. Observation of solar neutrinos and those from supernova 1987A gave further evidence for on-going nucleosynthesis, although understanding the precise quantity of solar neutrinos required several decades of research to resolve another mysterious factor of three. Meanwhile, a radioisotope of aluminium, with a half-life of under one million years, was observed to be co-rotating with the Galaxy by its Doppler shift. Most recently, the observation of a binary neutron star merger in both gravitational and electromagnetic waves provided the first direct observational evidence for a site of the rapid neutron capture process. These and other simple examples which both give strong evidence to the theory of nucleosynthesis as well as future challenges will be discussed, in particular from an experimental point of view.

Grad students and postdocs: There will be a Gather Town seminar prep discussion at 1pm (ET). It will specifically be geared toward young researchers to provide background on the topic of seminar.
The discussion leader is Johnson Liang from TRIUMF.