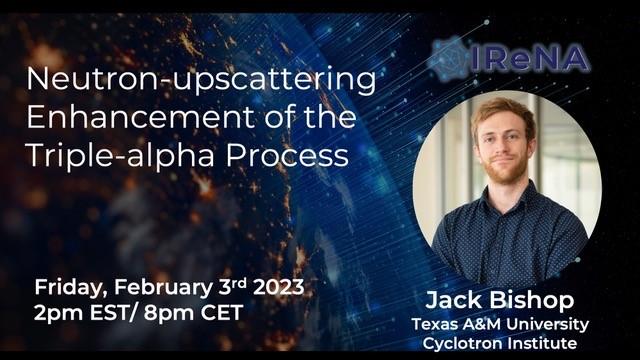 Carbon is produced is stars mainly via the triple-alpha process where three helium nuclei fuse to form an excited state of carbon-12 known as the Hoyle state. This is a nuclear resonance (an excited form of a nucleus) that has properties that guide the rate that the triple alpha process takes place. Primarily, the key property is how often the Hoyle state is able to lose energy and end up in the ground state of carbon-12 – known as the radiative width. It has long been discussed that in the presence of a very high density of neutrons (~106 g/cm3), the rate of carbon formation may dramatically increase due to the phenomenon of neutron upscattering. This is where a low-energy neutron interacts with the resonance and takes energy away as kinetic energy, leaving the carbon-12 in the ground state and therefore increasing the effective radiative width. Such a scenario has up until now been impossible to measure experimentally.

In this talk I will guide the audience through the physics behind this case, demonstrate how a TPC works, and show the results from the experiment that answers the question of the importance of neutron-upscattering in the triple-alpha process.