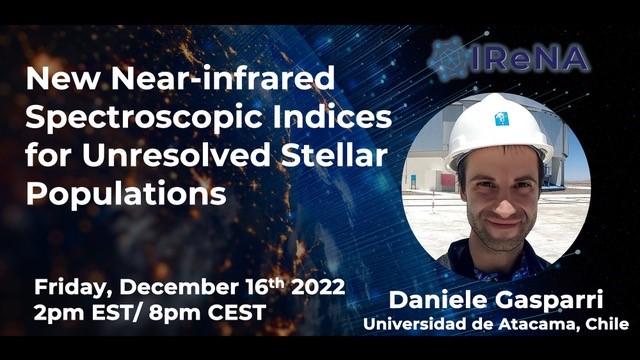 In unresolved galaxies, age, metallicity, α/Fe enhancement of the stellar populations, as well as the IMF and the mass can be constrained via full spectra fitting or via line-strength index analysis. The Lick/IDS system is a prime example of line-strength spectroscopic indices that are sensitive to these parameters in the optical domain. In the Near-Infrared (NIR), where the upcoming generation of telescopes will primarily observe, we lack such a system, and the full spectral fitting technique is not yet reliable.

To study the properties of the stellar populations in the NIR for unresolved galaxies, a new line-strength index system has been defined, initially for the most recent releases of the stellar libraries. The new indices are tested and calibrated using the spectra of the central regions of nearby galaxies of the highest quality, both in S/N and wavelength range. New mass, age, metallicity, α/Fe and IMF indicators are introduced and compared to the most recent empirical SSP models.

The new NIR index system will be very useful for characterizing the stellar populations of galaxies, and it sets new constraints for a fine-tuning of the SSP models, which are still unable to reproduce the yields of the AGB stars, whose light dominates in the NIR.