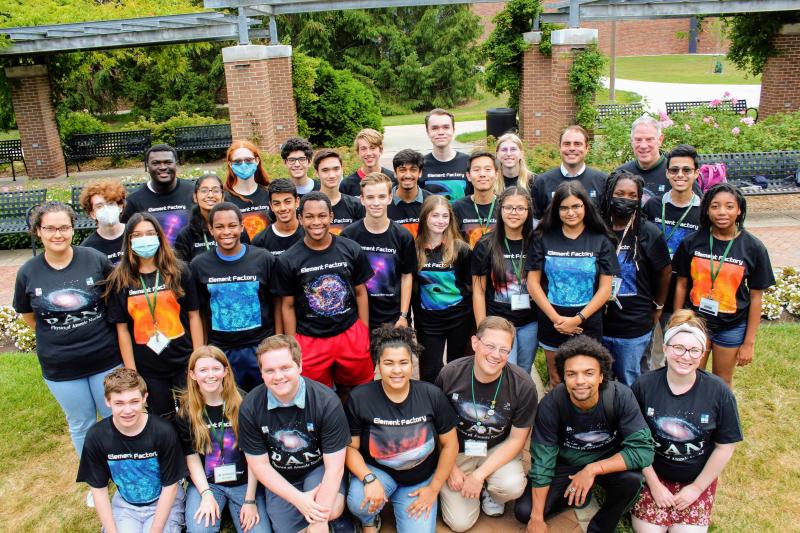 The 29th annual Physics of Atomic Nuclei (PAN) program ran July 25-29. This year’s program marked the return to in-person events after two years of PAN online. The goals were unchanged: to give motivated high-school students an authentic research experience while connecting them to current scientists and an inside view of academia.

Twenty-three high-school students attended this year’s PAN program, and 12 MSU students volunteered for various parts of the program. JINA drew more than 20 volunteers from the Facility for Rare Isotope Beams (FRIB) and MSU’s Department of Physics and Astronomy to create and share the program content: lectures, activities, and experiments. Lectures included an overview of radiation detection, an exploration of the matter/antimatter disparity in our universe, and the history of nuclei created since the Big Bang. Students created their own neutron capture process models, simulated nuclear fragmentation to create rare isotopes, explored the density of galaxies via images from the James Webb Space Telescope, and built a 3D model of the chart of nuclides with towers of LEGO bricks to represent the energy per particle for each isotope.

After conducting three capstone experiments at PAN 2022, student research teams reported on them at a poster session on the final afternoon.

PAN participants were housed in a residence hall with chaperones who were current MSU physics students. These volunteers, along with several other undergraduates and graduate students, mentored the students by sharing their experience in the field and the path that led them to it. Nearly half of those mentors were PAN alumni themselves!

Post-survey data indicates that PAN 2022 had a very similar impact as previous programs, whether they were in-person or online. Students commonly expressed these lessons learned:

Students, organizers, and volunteers were very pleased with the program. In the words of one student: “This pre-college program made me even more excited about attending college. It gave me huge insight on the ins and outs of the physics world of research and experiments. There were times where I felt discouraged because the topics we were learning about were very complex, but the faculty encouraged me. This program taught me that you can't be afraid to ask questions. I also discovered so many physics fields that I had never even thought of before.”

The Joint Institute for Nuclear Astrophysics - Center for the Evolution of the Elements (JINA-CEE) is a National Science Foundation Physics Frontiers Center that enables rapid communication and coordination across field boundaries and connects new research.

Michigan State University operates the Facility for Rare Isotope Beams (FRIB) as a user facility for the U.S. Department of Energy Office of Science (DOE-SC), supporting the mission of the DOE-SC Office of Nuclear Physics. Hosting what is designed to be the most powerful heavy-ion accelerator, FRIB enables scientists to make discoveries about the properties of rare isotopes in order to better understand the physics of nuclei, nuclear astrophysics, fundamental interactions, and applications for society, including in medicine, homeland security, and industry.