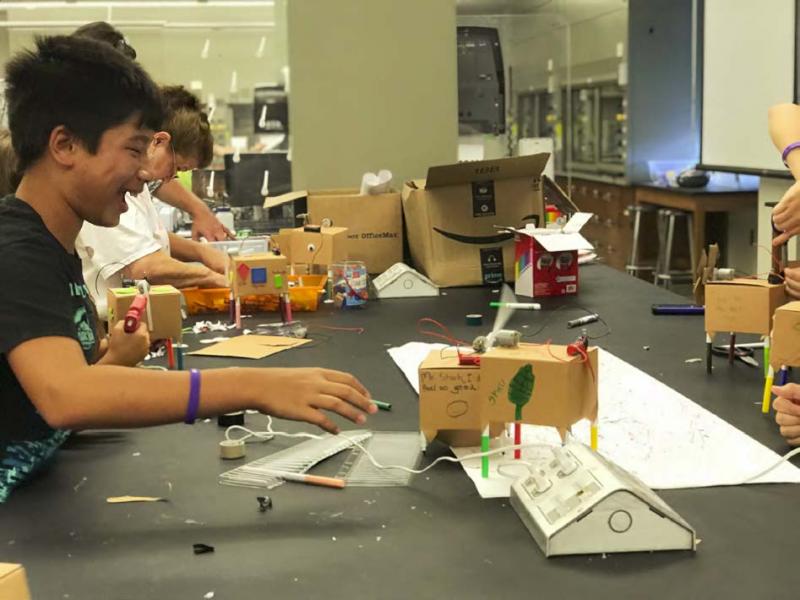 In its 8th year, the Art 2 Science Camp at the University of Notre Dame underwent two major changes. The traditional Friday sched­ule was replaced by a field trip to Kalamazoo that included visits to the Valley Museum and the Institute of Arts. In 2018, the camp was also expanded to offer two week-long sessions so that twice as many students could participate. Hailed as one of the best camps in the South Bend area, we consistently turned away potential camp­ers each year. This year, each week hosted 150 campers ages 8-12 and 12 junior counselors ages 13-18. Families traveled from as far away as Texas to participate in the program.

Campers were divided into groups by age and rotated through 24 different hands-on activities that combined art, science, and math to create creative projects such as magnetic slime and guitars. Participants also carried observation notebooks with them throughout the week to record their thoughts and impressions about the activities.

Feedback through surveys from students, counselors, activity lead­ers and parents were overall positive. All camp staff who completed the survey indicated they would like to participate again. Moreover, over 90% of our counselors participate every year. 98% of parents agreed the camp was a positive learning experience for their child and 85% agreed it increased their child’s interest in science. From one parent “My rising 5th grader LOVED Art to Science camp. She has always had an interest in science, but this experience was far and above anything she’s done in the past. She came home every day wanting to share what she learned--something she definitely doesn’t do during the school year. Thank you so much for a fantastic week!”

Participants begin the camp with a high level of excitement about science. On average they indicate liking science 8.5 out of 10 both at the beginning and end of camp. However, one aspect of the pre/ post survey involved word associations which allows us to measure changes in affective views of science. Campers were more likely to describe science as “play”, “creative” and “fun” as well as both “easy” and “hard” after participating in the camp.