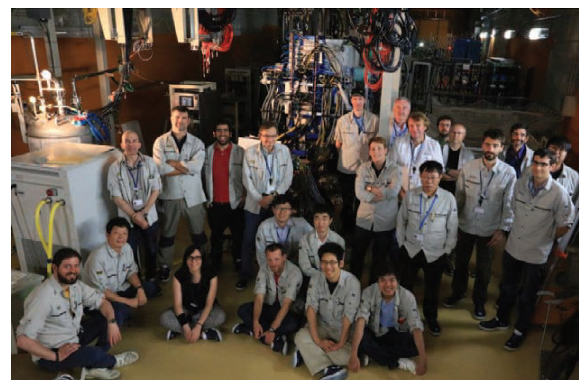 The BRIKEN collaboration recently published a measurement of Pn-values for 33 isotopes important to astrophysics models of nucleosynthesis via the rapid neutron capture process (r-process). Pn-values measure the probability that neutrons are emitted following the beta-decay of neutron-rich isotopes. It is one of the key pieces of nuclear data for r-process models, which is generally needed across all possible astrophysical scenarios. Delayed neutrons will affect the abundances of heavy elements produced by an r-process event as the unstable isotopes synthesized during the neutron-capture phase decay towards beta-stability.

The beta-delayed neutron at RIKEN (BRIKEN) collaboration was formed by several research groups in Asia, Europe and North America. The collaboration developed a high-efficiency neutron detector for Pn-value measurements based on 3He counters [1]. The detector was specially designed for the properties of fast unstable isotopes beams at the Radioactive Isotope Beam Factory (RIBF) in RIKEN, Japan. Combining the high-efficiency of the BRIKEN detector and intense beams for neutron-rich isotopes produced at RIBF allowed BRIKEN to study a large number of r-process isotopes from the 78Ni region [2] up to the region of the N=126 shell closure, with a campaign of experiments that began in 2017.

The latest BRIKEN results focused on the N=82 neutron-shell closure. They include isotopes from 116Tc to 130Cd, with 16 Pn-values measured for the first time. The measurement covers a mass range associated with r-process waiting-point isotopes at N=82 like 128Pd, and is key to reduce the nuclear uncertainty for the formation of the A=130 r-process abundance peak. The results illustrate the impact of precise new experimental data. With the new data the authors evaluated the ratio for the abundance of A=127 and A=128 isotopes produced from the decay of the 127Rh and 128Pn waiting points with an uncertainty of only 14% due to the Pn-value data, and consistent with solar system abundances. The result shows good agreement with the latest calculation of Pn-values with the FRDM+QRPA model, yet diverges by up to a factor of 4 if compared with other theoretical models used in r-process calculations. The work was the Ph.D. project of Oscar Hall (University of Edinburgh) and the experiment was led in part by JINA-CEE members as spokespersons.

The first results from the BRIKEN collaboration demonstrate the potential of combining sensitive experimental equipment with the intense rare isotope beams at new generation facilities. More BRIKEN results are expected in the near future from data sets currently under analysis, which together with experiments planned at other laboratories like FRIB will make significant progress in the quest of providing accurate data to elucidate the nature of the r-process.