Broken Neutron Link in the Sky 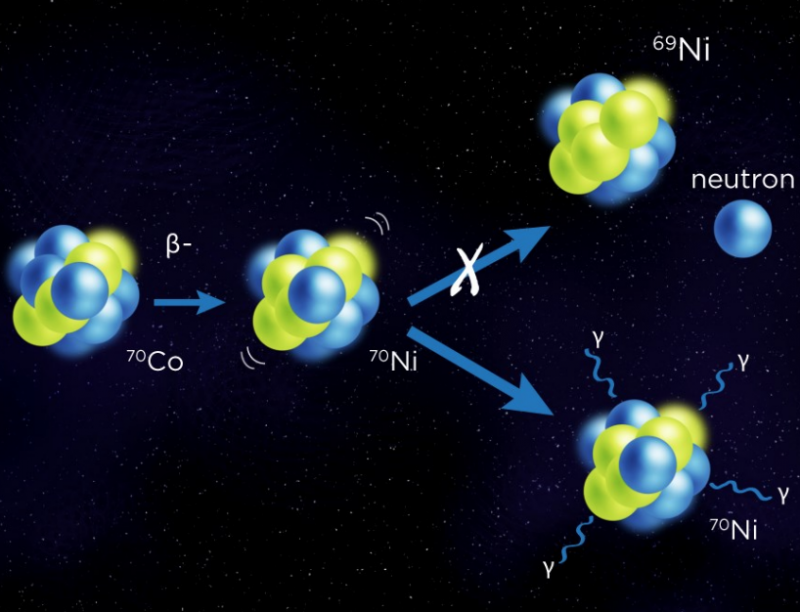 In stellar explosions, such as supernovae, chemical elements are produced in complex networks of nuclear reactions and decays, involving a large number of unstable nuclei that exist only for a tiny fraction of a second. These reaction chains produce characteristic patterns of element abundances. To understand how the elemental composition of the Universe came about, many properties of associated short-lived nuclei, such as their masses, decays, and reaction rates, have to be characterized. While those isotopes are nonexistent on Earth, particle accelerators at nuclear facilities, such as the National Superconducting Cyclotron Laboratory and the future Facility for Rare Isotope Beams at MSU, allow to create and study unstable nuclei in laboratory conditions. Often, surprises are encountered.

A case in point is a recent experiment executed by a collaboration of scientists from MSU, the University of Oslo, Central Michigan University, Los Alamos National Laboratory, and Lawrence Livermore National Laboratory. When they studied the radioactive decay of the exotic nucleus of 70Co leading to excited states of 70Ni that are unbound to neutron decay, it was observed that 70Ni subsequently preferentially emits energetic photons – or gamma rays – instead of the expected neutron. An explanation was found in the mismatch in the structure of excited states of 70Ni and 69Ni, the two nuclei that would have been connected by the expected emission of a neutron. This anomaly in the decay properties may have an impact on the synthesis of the elements as the hindered neutron emission is likely to divert the reaction network from the projected path.