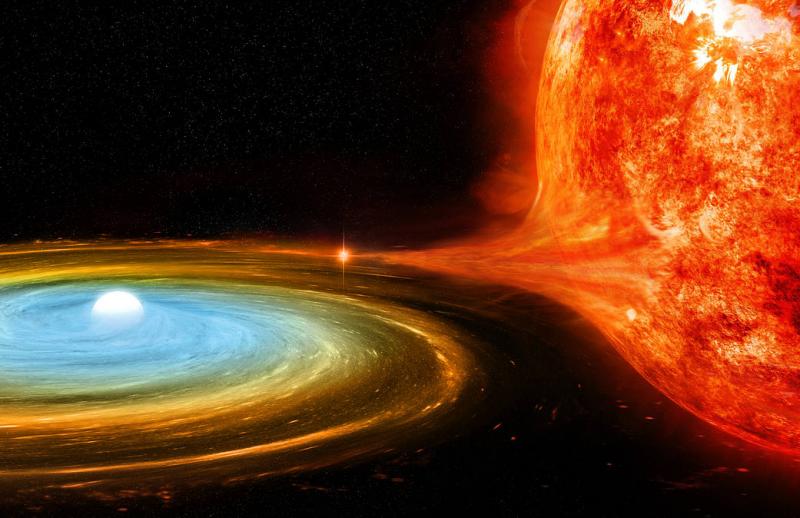 Type I X-ray bursts are among the most fascinating stellar phenomena we can observe, releasing enormous amounts of energy within just a few seconds. Being the most frequent thermonuclear explosions in the galaxy, they provide unique laboratories for testing physics of the densest known form of matter: neutron stars. The basic mechanism behind X-ray bursts is understood, but an important open question is the composition of the material that fuels the burst, especially the amount of nuclei heavier than helium. A new JINA-CEE study led by postdoc Jaspreet Randhawa sheds new light on this question.

Type I X-ray bursts occur in binary systems consisting of a neutron star and a main-sequence companion, usually referred to as the donor star. In these so-called X-ray binaries, material from the donor’s envelope is gravitationally pulled onto the surface of the neutron star, where it accumulates, raising the temperature and density until a thermonuclear runaway ensues, powering the X-ray burst. In the early 90s, Bildsten et al. pointed out that while accreted elements heavier than Hydrogen and Helium slow down quickly on the surface of the neutron star, incoming protons do not slow down as much. As a consequence, they slam into the already stopped heavy nuclei at high energies destroying them via nuclear spallation reactions [1].

Bildsten’s study focused on how H and He destroy Carbon, Nitrogen and Oxygen (CNO cycle nuclei) by spallation, and showed that the CNO nuclei survival probability is very small. The amount of CNO nuclei present in the accreted layer is a determining factor for burst models as the CNO cycle converts H into He and changes ignition conditions and fuel composition of subsequent bursts.

This new study originated as a student group project at a JINA-CEE network school, where it occurred to then grad student Radhawa that the heavy nuclei may not necessarily be completely destroyed by spallation. Indeed, him and collaborators now conclude that the heavy nuclei are often instead transformed into other heavy nuclei which themselves undergo further transformations, resulting in a network of spallation reactions. Through this mechanism, Randhawa et al. find that CNO elements can be replenished due to the destruction of relatively heavier elements by spallation (See Fig. 1).

The resulting  higher abundances of carbon, nitrogen, and oxygen, especially at lower accretion rates, alter the amount of hydrogen present at the time of burst ignition. The new spallation-altered accreted composition will serve as an important parameter in future X-ray burst model calculations that aim to predict the thermal and compositional structure of accreted neutron star crusts and extract the elusive properties of neutron stars. For instance, Randhawa et al. show that the difference between original spallation models and replenished (this work) is a factor of 2 for abundances of produced Urca nuclei (See Fig. 2). These nuclei affect the cooling of the neutron star crust and the burst light curve. The impact this has in the burst light curve seems significant compared to other factors, for example, changes in (unknown) reactions rates or in astrophysical conditions like accretion rates or Hydrogen mass fraction.