An international team of researchers has made the first determination of several nuclear masses, simultaneously constraining the structure of atomic nuclei and neutron stars. The findings, published as a Rapid Communication in Physical Review C, pinpoint the disappearance of “magic” neutron numbers for extremely neutron-rich nuclei, which consequently results in a cooler neutron star crust.

The collaboration, brought together by the Joint Institute for Nuclear Astrophysics - Center for the Evolution of the Elements (JINA-CEE), measured the nuclear masses by performing a time trial along a 60 meter path for hundreds of nuclei simultaneously. The experiment achieved a measurement precision of 1 part in 100,000; this is roughly a person’s fractional change in weight after picking up a penny. Masses were determined for the first time for several neutron-rich species of titanium, vanadium, chromium, manganese, and iron, while substantially reduced mass uncertainties were obtained for neutron-rich species of argon and scandium.

By considering the newly obtained masses along with the previously established nuclear landscape, this work identified the location where neutron numbers 34 and 40 no longer contribute their “magic” attributes to a nucleus.

The structure of these atomic nuclei is intimately linked to the structure of neutron stars, ultradense remnants of massive stellar explosions. The crystalline outer layer of a neutron star, known as the crust, is composed of neutron-rich nuclei immersed in an electron gas. Neutron stars that siphon gas from a binary companion star, known as accreting neutron stars, bury nuclei to increasingly deeper depths in the crust. Moving to increased pressures results in nuclei capturing electrons. Near the thin shell where electron capture occurs for a given nucleus, electrons can also be re-emitted in a beta-decay, resulting in a cycling between electron-capture and beta-decay. Such processes in an accreted neutron star crust result in local heat-sinks that can alter the neutron star thermal structure and impact associated observables that are used to constrain the properties of ultradense matter. 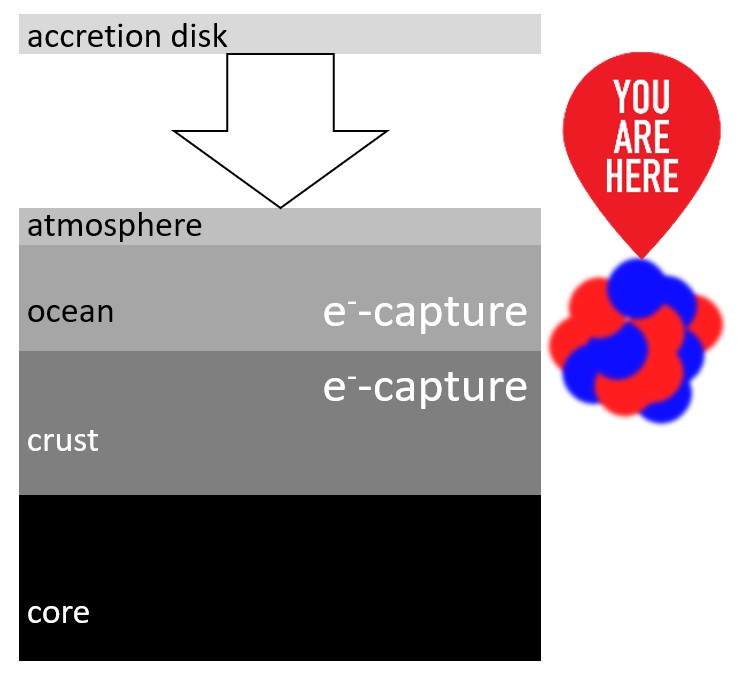