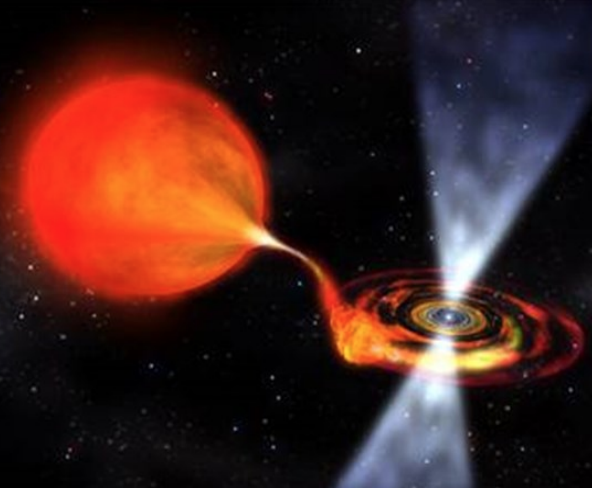 Neutron stars are the remnants of supernova explosions in medium-sized stars, and when accompanied by a binary companion, show a variety of high-energy phenomena. One example is thermonuclear bursts, where the nuclear fuel (mainly hydrogen and helium) accumulated on the surface of the star ignites and burns to heavier elements. Observers have been working for decades to gather observations of these events, detectable by satellite-based X-ray telescopes. At the same time, theorists have built increasingly more detailed numerical models predicting burst behavior, and including thousands of nuclear masses and reaction rates measured in terrestrial laboratories.

To date, efforts to match the burst properties with models --- and hence infer the system parameters --- have been limited, for several reasons. First, the observed behavior of many bursting neutron stars is frequently at odds with models, with irregular, inefficient bursts. Second, even for the “well-behaved” sources, there is substantial degeneracy in the model parameters, such that very different input parameters can produce similar burst lightcurves and recurrence times in numerical models.

This degeneracy is best illustrated by the case of GS 1826-24, nicknamed the “Clocked burster” for its highly regular and consistent bursts. An early study of the bursting behavior suggested that the lack of variability in the burst profiles over a range of accretion rates required unusually low fraction of CNO nuclei in the accreted fuel [1]. On the other hand, a comparison of the results of numerical models with the observations suggested instead that the profiles could have arisen from burst fuel with CNO mass fraction up to twenty times higher, consistent with the solar value [2].

To address this ambiguity, it is clear that comparisons of observations and models need to be made over the widest possible range of accretion rates, and incorporating all the available observational data. To this end, we have recently released a sample of observational data for four bursting neutron stars, representing four distinct cases of nuclear ignition, and covering a range of accretion rates [3]. There are three key applications of the sample. First, each example can serve as a test case for different numerical models, to measure the intrinsic uncertainty of different codes. This fundamental uncertainty has not been quantified before. Second, each case can be used to determine the key nuclear reactions which have the most influence on the shape of the burst lightcurve.

Third, each set of data will be used to identify the required input parameters to the models to match in detail the observed bursts with those predicted. This “fingerprinting” of burst sources has the potential to reveal the composition of the accreted fuel, and hence the evolutionary state of the mass donor. The comparison is also sensitive to the neutron star mass and radius, which may allow constraints on the poorly understood nuclear equation of state. Ultimately this effort is also hoped to constrain the nuclear physics input to the models. Further work is under way to fully exploit the new sample of burst observations.