The First Age Map of the Galactic Halo 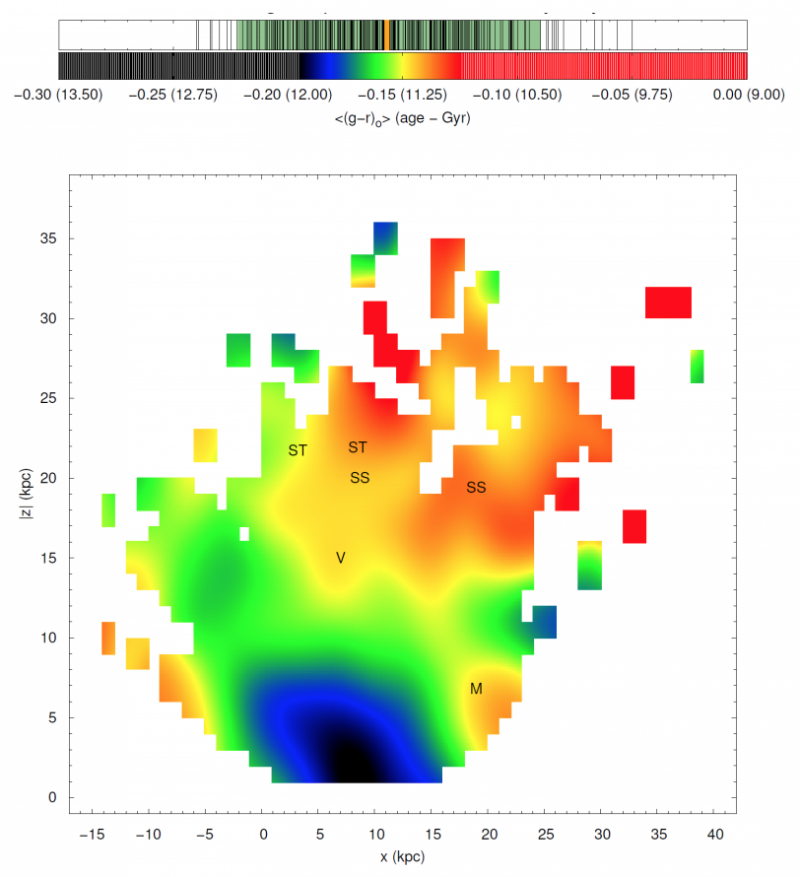 The assembly history of the Milky Way provides fundamental information not only on the growth of large galaxies throughout the Universe, but helps to constrain the nature of the stellar populations that are now found throughout the halo of the galaxy. JINA-CEE researchers have now used a technique originally developed in part by Notre Dame Chair of Astrophysics Timothy Beers, which maps the colors of core-helium burning stars, known as Blue Horizontal-Branch (BHB) stars, into estimates of stellar ages, and used these to produce the first chronographic age map of the Milky Way’s halo population. Extensions of this technique are now being used to produce an even higher resolution age map based on large photometric samples of stars from the Sloan Digital Sky Survey, and even larger samples that are coming available in the near future.

The map shows the distribution of derived ages for stars in the halo of our galaxy, the Milky Way (color coding shown at the top). As seen in the map, some of the oldest stars in the galaxy, shown in black/blue at the bottom, are found close to the Galactic center (X=0, |Z| = 0 in the map), as predicted by contemporary models for galaxy assembly. This ancient chronographic sphere extends out to our Sun's location (X = 8.5, |Z| = 0), indicating that many old metal-poor stars can be found relatively nearby. The JINA-CEE team led by Beers is actively surveying this region in order to identify bright metal-poor stars for subsequent high-resolution observations.