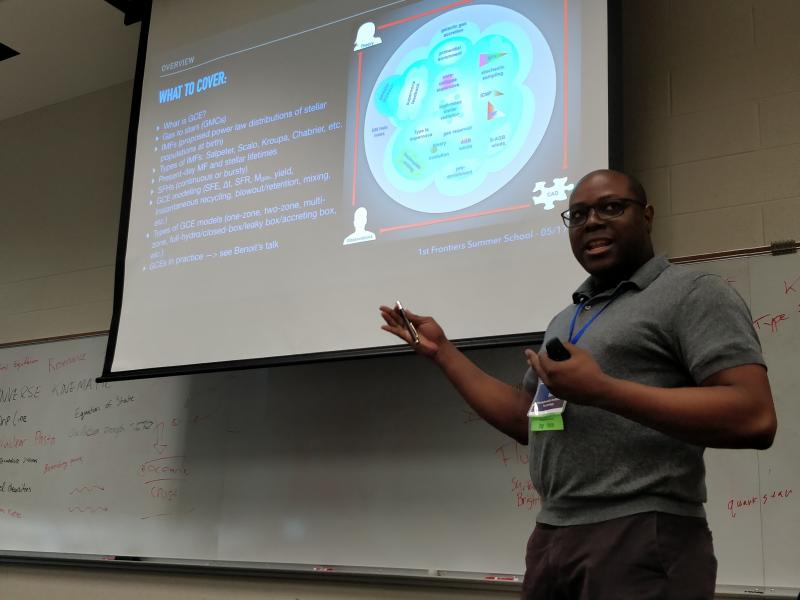 Duane Lee (Massachusetts Institute of Technology) lecturing on galactic chemical evolution: how nuclei are recycled as stars are born and die in the galaxy.

Owing to the great enthusiasm and bold initiative of a group of early-career JINA-CEE scientists, the First Frontiers Summer School took place at Michigan State University on May this year, prior to the annual Frontiers Meeting. By recognizing the lack of a multidisciplinary education in nuclear astrophysics at their own institutions, junior researchers Louis Wagner, Chelsea Harris, Daniel Votaw, Matt Mumpower, Benoit Côté, Cathleen Fry, Erika Holmbeck, MacKenzie Warren, Alex Ji, and Jinmi Yoon, lead by Matt Caplan, put together a proposal for a JINA-CEE supported summer school aimed to train astronomers in nuclear physics, and nuclear physicists in astronomy. Their proposal was funded, and they put together a school program that would equip participants with interdisciplinary training on the major areas of JINA-CEE science:

· Where do the elements come from that make up our world?

· What are the basic properties of matter when compressed to high density?

A total of 46 participants with diverse backgrounds and academic levels (from undergraduate, to senior postdoc) and from 19 different institutions around the world attended the school. The program also included plenty of time for free discussion, which helped networking, and even initiate some scientific collaborations. “Having speakers who are early career scientists themselves helped foster a great learning environment. Responses to post-event survey were overwhelmingly positive!” said Matt Caplan, who lectured at the summer school as a postdoc, but is now an assistant professor at Illinois State University.

-“This field requires knowledge from a lot of physics that is often taught separately in classes, and this summer school gave us a space to discuss how everything comes together” … “it felt like we were active participants (as opposed to simply passive listeners being talked to).”

-“Some of the theoretical nuclear stuff was pretty cool and I didn’t know anything about it until I came to the school.”

-“The talks and pace was phenomenal! I really appreciated that. The organizers were absolutely wonderful too. The question & answer section was great for my confidence too.”

-“I really liked how the lectures were set at a level that was easy to understand for undergrad and new grad students. The lecturers did a good job in making us familiar with some of the buzz words that are often used in the field.”

All school lectures are publicly available at the school website.