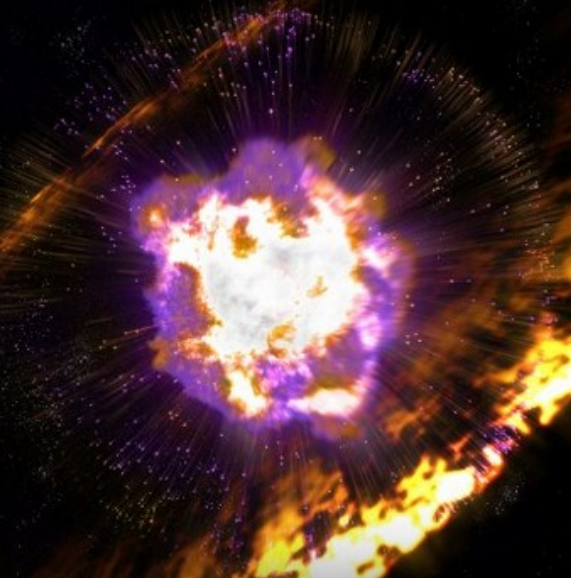 The origin of the heavier elements from germanium to silver is not yet fully understood even though it is currently assumed that nature may produce those elements in multiple nucleosynthesis processes and scenarios. A suitable process to create those elements is the weak rapid neutron capture process (r-process) in neutrino driven winds that occur for example in core-collapse supernovae. These winds emerge from newly born neutron stars in the first seconds after a supernova explosion and happen frequently enough to explain the relatively large number of stars with enhanced germanium to silver abundances (Z = 32-47).

Once the wind has cooled down after a few seconds, charged particle reactions are key in the production of the heavy elements. In particular, many (α, n) type reactions play an important role, but none of the most relevant (α, n) reactions had been measured in the energy (temperature) range relevant for weak r-process astrophysical conditions. So far modelers have to rely on theoretical predictions of those rates. However, the theoretical uncertainties of the calculated reaction rates can be as high as 2 orders of magnitude [1] and abundance network calculations are highly sensitive within the expected theoretical uncertainties of these rates [2]. So in order to get a step closer to reliably predict the rates of the reactions that control the production of the heavier elements, we have begun a systematic study searching for the critical reaction rates that influence the most the final abundances in weak r-process scenarios [2,3].

This sensitivity study allows to identify the most impactful reaction rates, which can then be pinned down experimentally by measurements in radioactive beam facilities. Most of the reaction rates responsible for the production of elements Z=32-47 in neutrino driven winds are either viable with current beam intensities in existing nuclear physics facilities or will be in the near future. The direct measurement of some of the relevant (α, n) reaction rates has already started at the ReA facility at MSU and more measurements are planned in the next few years. These measurements combined with stellar abundance observations will help understand how the heavier elements are produced in our Galaxy.