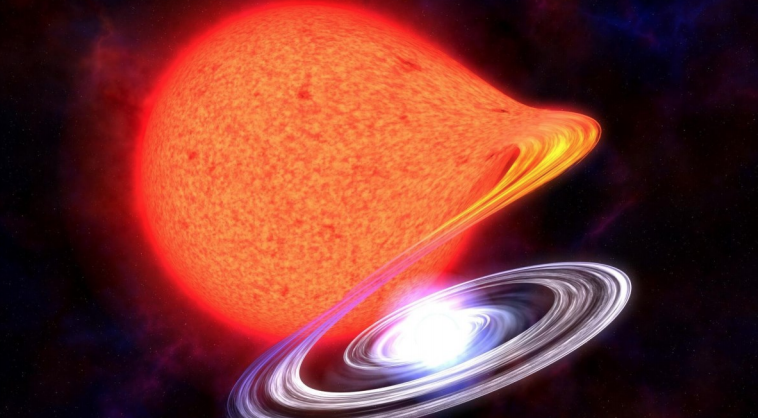 Electron capture reactions, where high density forces an electron into a proton and transforms the pair into a neutron, are one of the main drivers of temperature changes near the neutron star surface. As such, these reactions have a substantial impact on interpretations of accreting neutron star observations. In particular, electron captures on nuclei with 56 nucleons (protons and neutrons), which typically dominate the neutron star surface composition, were thought to be the primary drivers of accreting neutron stars’ near-surface thermal profile. Until now, astrophysics models predicted either substantial heating or cooling for electron capture on scandium-56, depending on the mass of this nucleus.

Research performed at the National Superconducting Cyclotron Laboratory (NSCL) at Michigan State University by a collaboration within JINA-CEE has shown that electron capture onto scandium-56 produces much less heat than otherwise thought possible. Importantly, the work also demonstrated that the scandium -56 electron capture does not lead to a substantial cooling process that was recently proposed [1]. Therefore, this work [2] showed that nuclei with odd numbers of nucleons, which are much less abundant on neutron star surfaces but are more prone to generating substantial cooling, are of primary importance in constraining the temperature profile near accreted neutron star surfaces. This result was made possible by determining the mass of scandium-56 to a precision of 1 part in 100,000; roughly a person’s fractional change in weight after picking up a penny!

Scandium-56, which lives for less than 1/40th of a second, was produced by accelerating stable selenium nuclei to half the speed of light using the Coupled Cyclotrons at the NSCL and breaking them apart on a beryllium foil. A precise measurement of the time it took the scandium-56 nuclei to travel 200 feet, which was roughly 0.0000005 seconds, allowed the JINA researchers to calculate this isotope’s mass. The scandium-56 mass, when coupled with astrophysics models, demonstrated that electron capture on this nucleus neither strongly heats nor cools, substantially altering interpretations of neutron star observations.