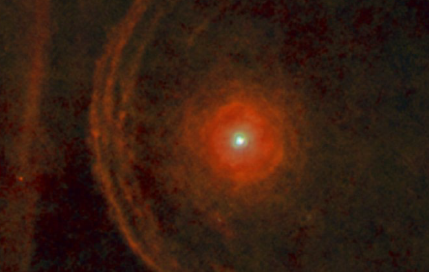 In the hours before the star collapses and explodes as a supernova, the rapid evolution of material in its core creates a multitude of neutrinos. Observing these pre-supernova neutrinos may help us understand the final stages of a massive star’s life — but they’ve never been looked for or detected. Stellar neutrinos can be created through two processes: thermal processes and beta processes. Thermal processes - for example, pair production in which a particle/antiparticle pair are created - depend on the thermodynamics of the stellar core. Beta processes - where a proton converts to a neutron or vice versa - are instead linked to the isotopic makeup of the star's core. If we can observe them, beta-process neutrinos may be able to tell us about the last steps of stellar nucleosynthesis in a massive star. But observing these neutrinos is not easy. Neutrinos interact only feebly with matter; out of the ~1060 neutrinos released in a supernova explosion, even our most sensitive detectors record just a few of them. Can we detecting the beta-process neutrinos that are released in the final few hours of a massive star’s life?