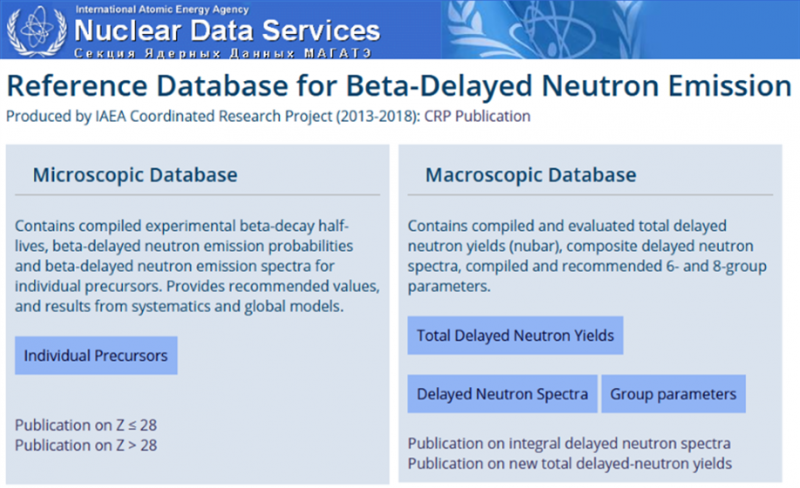 The reference database for beta-delayed neutron emission has been published and it is available at https://www-nds.iaea.org/beta-delayed-neutron/database.html

After a decade in the making, the Reference Database for Beta-Delayed Neutron Emitters has been published and is available online. The project was kicked-off in 2011 by JINA-CEE member Iris Dillmann and nuclear data evaluator Balraj Singh (McMaster University, Canada) after realizing that the existing compilations for neutron-branching ratios of beta-delayed neutron emitters were outdated and lacking documentation. After an initial Consultants Meeting at the International Atomic Energy Agency (IAEA) in Vienna, Austria a 5-year Coordinated Research Project (CRP) was initiated. The Summary paper from this CRP, co-written by Iris Dillmann as appointed IAEA rapporteur, has now been published as part of a Special Issue in Nuclear Data Sheets [1].

Beta-delayed neutron emitters play an important role not only in the control of reactors but also in nuclear structure and nuclear astrophysics. They occur on the neutron-rich side of the chart of nuclides whenever the neutron separation energy is smaller than the respective beta-decay energy window. Until now, this decay mode is energetically possible for more than 650 out of the 3435 known nuclei (19%). It is estimated that more than 4000 nuclei are still waiting to be discovered. The majority of them are on the neutron-rich side, and beta-delayed neutron emission will become their dominant decay mechanism. Unfortunately, an accurate theoretical description of this decay process is still lacking, especially in terms of competing de-excitation via gamma-rays and multi-neutron emission. This incomplete theoretical description creates an uncertainty in astrophysical simulations of the rapid neutron capture process (r-process) since the beta-delayed neutrons are predominantly emitted in the late stages of the r-process nucleosynthesis during the freeze-out phase. In this stage the emitted neutrons are recaptured by the material decaying back to stability and have a direct influence on the resulting r-process abundance distribution.

This evaluation effort was very timely. The Beta-Delayed Neutrons at RIKEN (BRIKEN) project is about to conclude its campaign this fall after 5 years of data taking and measuring half-lives and neutron-branching ratios of >250 new beta-delayed neutron emitters of relevance for r-process nucleosynthesis. The implantation and neutron detectors used in the BRIKEN campaign will return to their host institutions and be used in the next years to measure the most neutron-rich nuclei that can be produced at the new RIB facilities FAIR and of course at FRIB.

This ongoing influx of new data will require an annual update of the database which will be carried out by JINA-CEE member and TRIUMF research associate Roger Caballero-Folch under guidance of evaluator Balraj Singh.