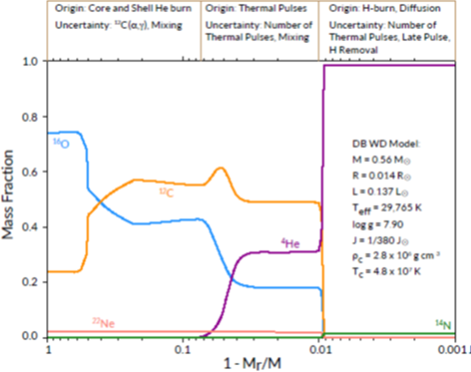 Photons emitted from stellar surfaces and neutrinos released from stellar interiors may not directly reveal all that we want to know about the internal constitution of the stars. For example, a direct view of the chemical stratification from the core to the surface is hidden. These interior abundance profiles matter: they impact a star’s opacity, thermodynamics, and nuclear energy generation. In addition, sound waves can resonate inside a star. We see these resonances as rhythmic changes, as pulsations, in the star's luminosity.

Most of a main-sequence star’s initial metallicity comes from the carbon, nitrogen and oxygen (CNO) inherited from its ambient interstellar medium. All of the CNO abundances pile up at nitrogen during hydrogen-burning on the main-sequence because the 14N(p,γ)15O reaction rate is the slowest step in the hydrogen-burning CNO cycle. During the ensuing helium-burning phase, all of the nitrogen is converted to 22Ne by the reaction sequence 14N(α,γ)18F(,e+ neutrinoe)18O(α,γ)22Ne. For stars like the Sun, this reaction sequence determines the 22Ne content of the resulting carbon oxygen white dwarf.

Does the 22Ne produced during helium burning impact the periods of pulsating white dwarfs?

To help answer this question, a JINA-CEE team led by Morgan Chidester of Arizona State University explored the pulsation periods of white dwarf models due to the presence, absence, and enhancement of 22Ne. They discovered the average period shifts by about 0.5% due to 22Ne.

Is this shift important? The observed pulsation periods of white dwarfs in the era of the Kepler and TESS missions are typically given to 6−7 significant figures of precision. The typical fit to the observed periods, using models without 22Ne, have a mean error of about 0.3%. Morgan's finding suggests that a systematic offset may be present in the fitting process when 22Ne is absent. This study can provide new inferences on the hidden chemical profiles of white dwarf stars, and new constraints on the nuclear reaction rates that produce those profiles.