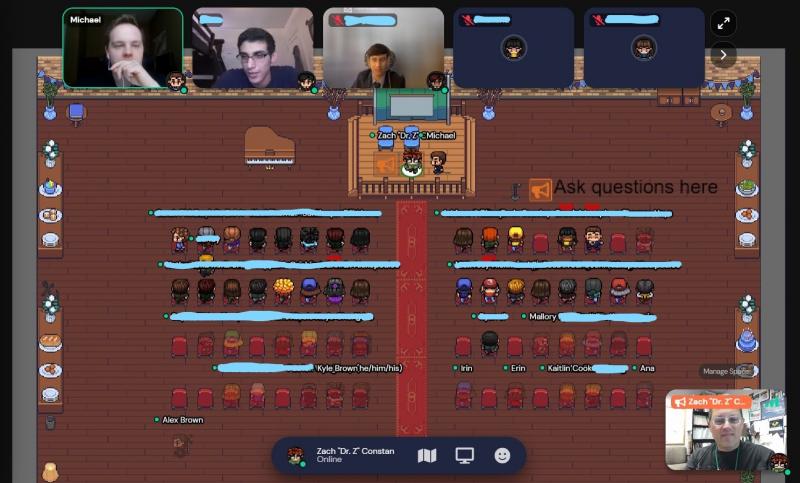 The 28th annual Physics of Atomic Nuclei (PAN) program ran during the week of July 26-30. This year’s program marked the second time PAN was conducted online. The goals were unchanged: to give motivated high school students an authentic research experience while connecting them to current scientists and an insider view of academia. For this year, organizers continued to develop the online framework of lessons and activities using GatherTown to achieve an online experience that facilitates interaction and communication.

With a robust volunteer turnout and the lack of logistical costs (housing, etc.), PAN was again able to host 36 students compared to the usual 24. Student teams chose one of the experiments to pursue throughout the week, working alongside a JINA mentor and overseen by the faculty who developed the project. Friday saw the culmination of those projects in the poster session where each group communicated their results. PAN online included more social interaction this year with the addition of a “Lunchroom” and games “Lounge” where students and scientists could meet in the Gather space.

Post-survey data indicates that PAN 2021, while online, had a very similar impact as the in-person programs of previous years. Students commonly expressed these lessons learned:

Students, organizers, and volunteers were very pleased with the program overall. In the words of one student:

“PAN has opened my eyes to the endless possibilities that come with a science degree/career. Before, I was set on working in a specific field, but now I know to keep my options open because there are many options I can explore. It has also helped me realize that you don't have to be a genius to be a good scientist. You need to be dedicated, confident, open-minded, and educated... I may not be ready yet, but I am confident that I will be.”

More details on the “hands-off” experiments completed at PAN Online: