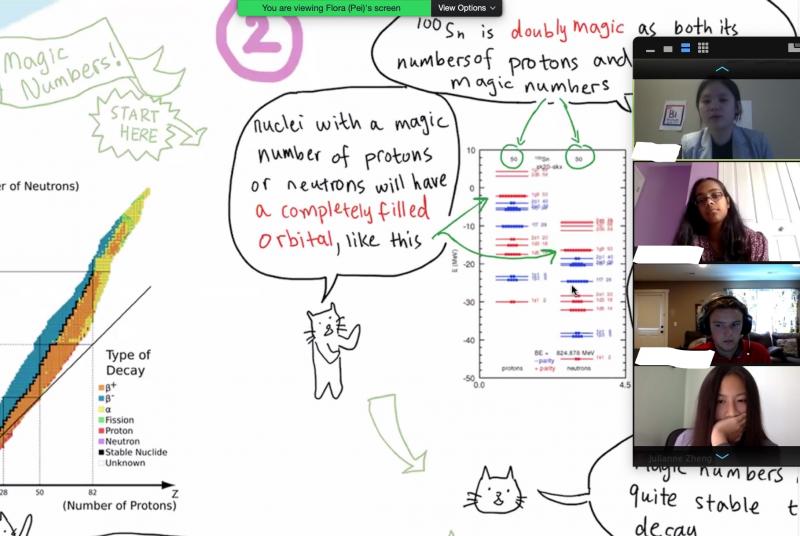 A research group presents their work with EDF Theory

The 27th edition of the Physics of Atomic Nuclei (PAN) summer camp took place online during the week of July 27-31, 2020. This is JINA-CEE's longest running outreach program, and in its first socially-distanced edition, it was a total success!

JINA partners worked together to create innovative research activities that replaced the usual hands-on laboratory experience, and were carried out by students in small groups supported by JINA-CEE mentors:

The absence of logistics requirements such as housing and space for activities also meant that the program was able to host more students at once: 36 compared to the usual 24, hailing from 17 different states.  Student teams chose one of the projects to pursue throughout the week, working alongside a JINA-CEE mentor and overseen by the faculty who developed the project. Friday saw the culmination of those projects in the poster/presentation session where each group communicated their results.

While there was understandably less social interaction among the students and with JINA-CEE researchers, post-surveys revealed the most important result: that PAN Online had a very similar impact as the in-person programs of previous years. Students commonly expressed these lessons learned:

Overall, PAN Online proved extremely successful! In the words of one student:

“A lot of speakers' answers to our questions have shown me that they, in fact, do not have the answers to a lot of our questions; the scientists of our generation will be the ones to answer them. I didn't really understand the enormity of that, and there is still so much unanswered, and it takes a research community to find those answers. Soon, I will be a part of that research community; I will be doing the research to find those answers, and PAN has really shown me how important that is.”

We wish to recognize the work and dedication of all the volunteer scientists who made PAN Online possible. Thank you!

More details on the “hands-off” experiments completed at PAN Online: