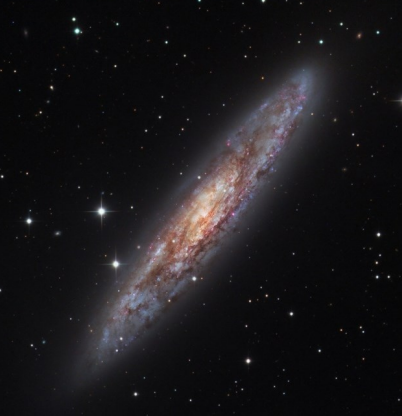 Galactic chemical evolution (GCE) models are powerful tools to explore the origin of the elements and to understand how galaxies in the universe form and evolve. Galactic inflows and outflows are processes where gas is being introduced into a galaxy from its surroundings, and where gas is being expelled from a galaxy into its environment, respectively. Both processes have an impact on numerical GCE predictions, since the metal-poor inflows dilute the metal concentration (often associated with [Fe/ H]) in the galaxy, and outflows carry away metals from the galaxy.

We found that all of our models can equally well reproduce the observed abundances of the galaxy Sculptor (Fig. on the right), although they all point toward different concepts for how gas circulates inside and outside the galaxy. This implies that more constraints are needed to clarify which type of inflow and outflow models best describe the reality, other than stellar abundances. But most importantly, this work shows that GCE predictions are very sensitive to the choice of input stellar yields, which describe the output of stellar models and represent the mass of different elements ejected by stars as a function of their initial mass and chemical composition. In other words, the successes and failures of a GCE model will always be limited by its input yields. This study revealed that simple GCE models are sufficient to test stellar yields against observations and determine if stellar models produce enough or not enough of a particular element.