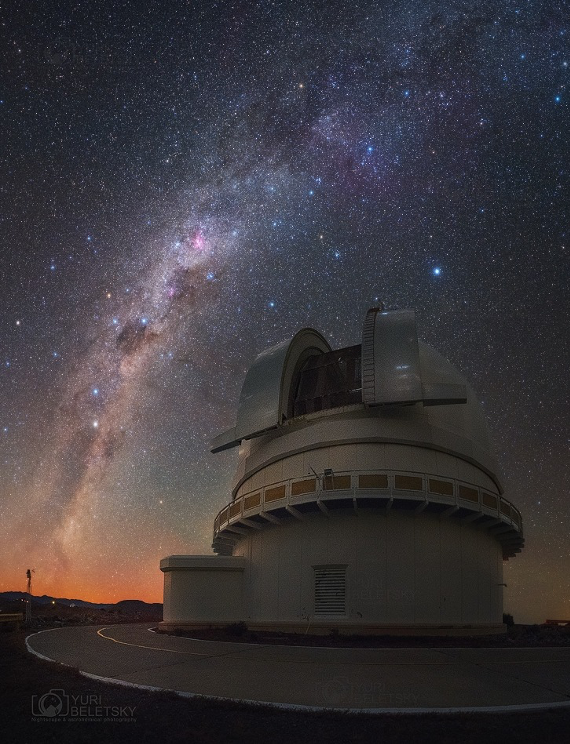 The Milky Way above the Du Pont telescope at Carnegie Las Campanas Observatory, located in the south of the Atacama desert in Chile. Photo Credit: Yuri Beletsky

What makes the heaviest elements that we find naturally on Earth, like gold, silver, and uranium?

Physically, the rapid neutron-capture (“r”) process is a primary route to creating these elements (Burbidge, Burbidge, Fowler, & Hoyle, 1957). However, identifying the astrophysical site with the right conditions that allows the r-process to occur presents a challenge both observationally and theoretically. One way in which to study the r-process is through the principle of Galactic Archaeology. Like their terrestrial counterparts, Galactic Archaeologists study stellar “fossils” in order to uncover the evolutionary history of the Milky Way and its stars. Of particular interest are old stars that, although lacking in elements like iron, are unexpectedly enhanced with even heavier elements made by the r-process, such as europium. These “r-process-enhanced” stars are the stellar descendants of explosive r-process events, exhibiting elements in their atmospheres that they inherited from a previous generation of stellar evolution. These enhanced stars allow studies of the primordial r-process sites that synthesized the heavy elements. Since it is difficult and rare to directly detect (candidate) r-process sites like neutron star mergers and supernovae, identifying r-process-enhanced stars provides an alternative route to observationally investigate this explosive process.

Established by JINA-CEE members, the R-Process Alliance is a collaboration with the ultimate goal of painting a complete picture of the r-process. Its members are currently building a robust catalog of observational r-process signatures. Present efforts include tripling the number of identified r-process-enhanced stars, aiming to increase from the mere ~30 that were previously known (Beers & Christlieb, 2005) to at least 100 in total. Led by University of Notre Dame Ph.D. graduate Erika Holmbeck, the R-Process Alliance recently submitted their fourth data release (Holmbeck, et al., 2020) for publication in The Astrophysical Journal Supplement Series.

This data release consists of high-resolution spectra of 232 stars in the Milky Way halo that had previously been validated as metal-poor by previous studies. The data were obtained using the Echelle (French for “ladder”) spectrograph mounted on the du Pont Telescope located at Las Campanas Observatory in Chile. These stellar spectra allow the determination of which elements -and sometimes, molecules- are present in the star’s atmosphere based on the relative intensity of each wavelength of light. A drop in relative intensity indicates an atomic absorption, which can be traced back to a characteristic element whose abundance can then be derived.

"The trip to Las Campanas is exhausting but always rewarding. Using the telescope is a tremendous responsibility, but at the same time it’s a physical manifestation of actively contributing research to the field. To see the telescopes and facilities in action is a humbling reminder that research -especially something like astronomy- is not a one-person (nor even one-nation) task." - Erika Holmbeck

With this data release, the R-Process Alliance has officially doubled the number of identified highly r-process enhanced stars, accomplishing in three years what previously took three decades (See Fig. 2). These observations provide essential information not only for determining the astrophysical site(s) of the r-process, but also towards understanding the evolutionary history of our Galaxy.

Future work includes applying these observations to theoretical models of, in particular, r-process sites, similar to work already begun by R-Process Alliance members (Holmbeck et al., 2019a,b). The abundance patterns of metal-poor stars offer a window into past nucleosynthetic events. Using theory to decode these events means we can better understand the particular sites that synthesized the heavy elements, and ultimately, the distinct nuclear physics involved in these astrophysical environments.