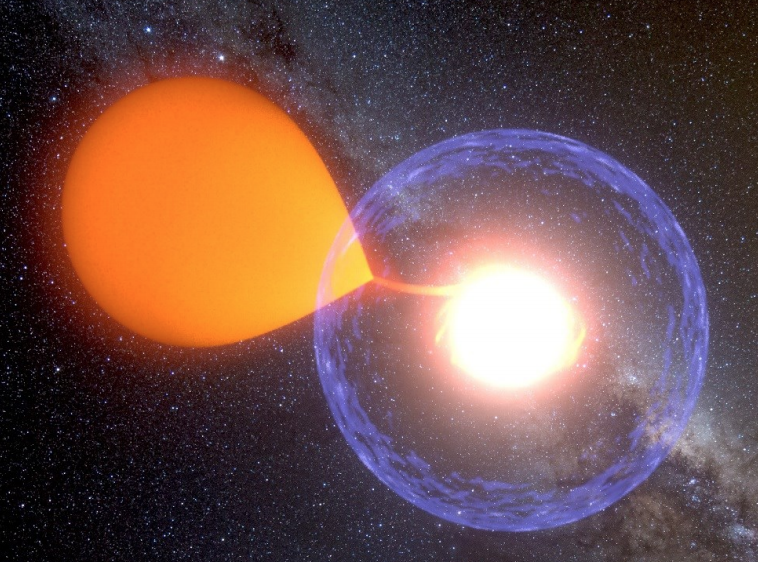 Theoretical efforts together with an experiment at the National Superconducting Cyclotron Laboratory (NSCL) at Michigan State University shed new light on the speed of a nuclear reaction that is thought to be critical in determining the elements created in stellar explosions known as novae. Novae are observed as new stars that seem to appear rather suddenly and fade again over weeks or months. They are powered by thermonuclear explosions on the surface of an otherwise rather dim, compact White Dwarf star. The explosions ensue when the White Dwarf star syphons hydrogen rich material from a close-by companion star over 100,000s of years until a sufficiently thick layer ignites and burns via nuclear reactions.

The rate of proton capture on a neutron deficient unstable isotope of Phosphorous, so called 30P, has been identified as a critical bottle-neck in creating elements such as silicon, sulfur, or even calcium during the explosion. The rate must be known to use observations of these elements - either through spectroscopic analysis with telescopes or through laboratory analysis of meteoritic grains thought to have formed in nova explosions - as a probe to understand the nova explosion. Unfortunately, current technology does not allow for the direct measurement of this nuclear reaction rate.

A collaboration of scientists from the University of Edinburgh, UPC Barcelona, and the JINA Center for the Evolution of the Elements at Michigan State University, Central Michigan University, and Argonne National Laboratory has developed an alternative approach to better determine the rate of proton capture on 30P. They studied the transfer of a proton from a deuterium target onto a beam of radioactive 30P nuclei produced at NSCL, into several excited nuclear states in the resulting 31S nucleus. From the emitted gamma-radiation, which could be detected with GRETINA, the largest gamma-ray detection system currently available in the US, the rate of transfer into one of the final states could be deduced. Nuclear theorists at Michigan State University were able to relate this to the rate of proton capture in a stellar environment. The results indicate that the reaction rate is smaller than expected by about a factor of 10. More work will be needed to measure transitions to other final states.