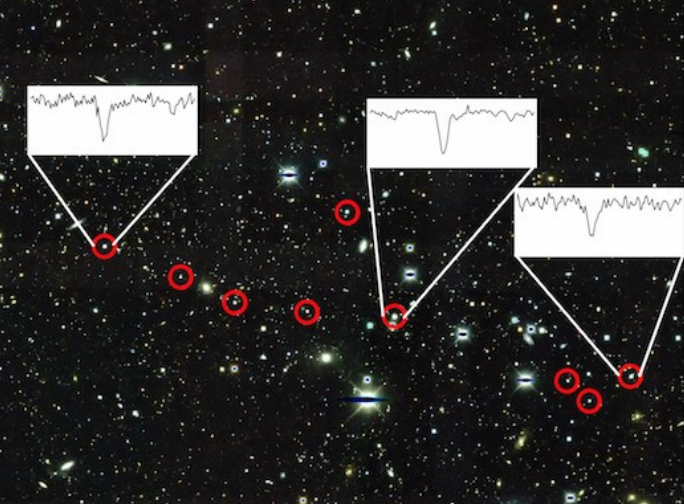 One of the great triumphs of modern astrophysics is the knowledge that the elements in the periodic table are created through nuclear processes in stars. The heaviest elements, such as gold and uranium, are synthesized by the rapid neutron-capture process in extreme environments with very high neutron densities. However, the astrophysical site of this “r-process” is still unknown. Determining the source of r-process elements is a fundamental goal of nuclear astrophysics.

The chemical abundances of metal-poor Milky Way halo stars provide observations to understand the rprocess. Some of these ancient stars contain large quantities of r-process material, showing the rprocess has a universal abundance pattern and suggesting that the heavy elements were synthesized very early in the universe. However, our present paradigm of hierarchical galaxy formation implies that the Milky Way’s halo is an amalgam of stars from the nascent Milky Way as well as stars stripped from infalling dwarf satellite galaxies. Understanding the origin of the halo stars requires a complete understanding of galaxy formation to model this complicated environment.

An alternative path is to study the r-process content of stars in the surviving dwarf satellite galaxies themselves, where galaxy formation is relatively simple compared to the Milky Way. The so-called “ultrafaint dwarf galaxies” are the simplest of these satellites, forming stars for less than 2-3 billion years. Stars in the first nine ultra-faint galaxies studied contained unusually low amounts of heavy elements, consistent with small amounts of r-process production operating in core-collapse supernovae.

Recently, two JINA affiliated groups studied the chemical composition of stars in the newly discovered ultrafaint dwarf galaxy Reticulum II. To everyone’s surprise, most of the stars in Reticulum II display extremely enhanced heavy element abundances. Furthermore, the relative abundances exactly follow the universal rprocess pattern. It is clear that the stars in this galaxy preserved an archaeological record of a rare and prolific r-process event. The rate and yield of the event inferred from these observations are consistent with an r-process event having taken place in a neutron star merger or a magnetically driven supernova. In particular, the inefficient star formation in a dwarf galaxy environment allows sufficient time for a binary neutron star system to merge, addressing previous concerns that neutron star mergers could not be responsible for producing r-process material at the earliest times. It thus appears that neutron star mergers can be the main source of the heaviest elements in the periodic table, from the early universe until today