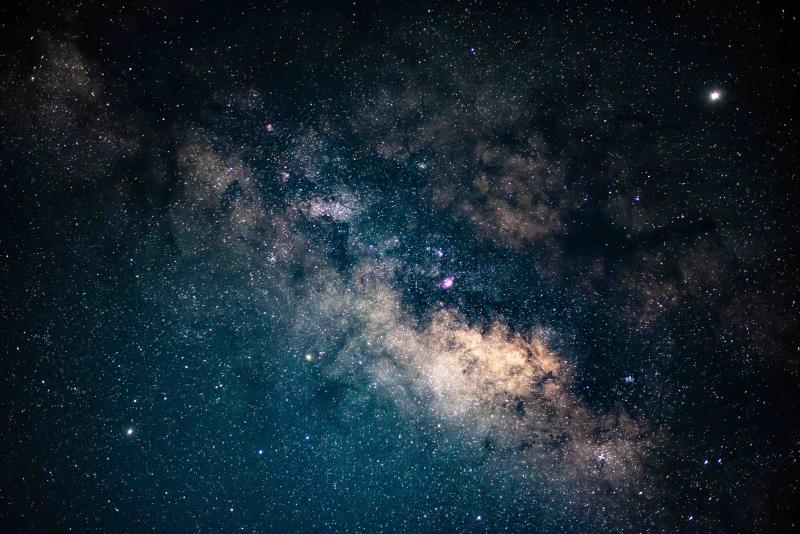 By Deanna Csomo McCool. Originally published at by the Notre Dame College of Science

Some of the rarest of stars found in the halo of the Milky Way -- stars enhanced by a set of reactions called the rapid neutron-capture process, or r-process -- have a shared chemical history and were likely “born” in the same small parent galaxy, a recent study by University of Notre Dame researchers and collaborators has shown.

The discovery, published recently in The Astrophysical Journal, came after compiling information gathered through an alliance of astronomers who discovered 446 metal-poor stars with characteristic signatures of the r-process elements in spectra obtained with an armada of telescopes – from moderate- to large-aperture  -- along with sophisticated dynamical clustering algorithms.

The research team, which included Notre Dame Professor Timothy Beers and former research assistant professor Vinicius Placco, in addition to Dmitrii Gudin (the paper’s lead author) ‘20Ph.D, Erika Holmbeck ‘20Ph.D., Sarah Dietz ‘20Ph.D., K. Rasmussen ‘20Ph.D.,  and doctoral candidate Derek Shank, along with other collaborators, identified 30 groups of r-process-enhanced stars having very similar orbits in the Milky Way, indicating they were once members of low-mass galaxies that were later disrupted into the halo of the Galaxy.

Just as someone trained in accident reconstruction can determine the make and model of a destroyed vehicle by recovery and analysis of small parts and pieces, the research team pieced together bits of cosmic information to make their discovery. Combined with data from the European Gaia satellite, which makes high-precision geometric measurements of stellar distances as well as their angular motions across the sky, the researchers were able to calculate the orbits of the individual stars.  They discovered that the elemental abundances of the stars in each dynamical group are statistically much more similar to one another than would be expected from chance. This allowed the team to claim that the stars in these groups shared the same chemical history, or “birthplace.”

The concept of the r-process was first suggested in 1957. Astrophysicists theorized that the universe’s heaviest elements were formed after a set of high-energy explosive nucleosynthesis events occurred.   Recent evidence favors the suggestion that when merging binary neutron stars—the densest stars astronomers know of—collide, they can form the neutron-rich metals that account for the lower half of the period table, and spray them outward throughout the local environment. These metals become incorporated into the gas clouds of newly minted stars, which accounts for the presence of r-process elements in our sun, which formed billions of years ago. These same clouds can eventually form planets, like earth, where these heavy metals, including the silver, gold, and platinum, are also found.

Recent studies, including those by this group, have shown that neutron star mergers are not the only way the r-process elements are formed. However, the r-process-enhanced stars that can be studied to resolve this question are only found about 3-5 percent of the time among the already rare metal-poor halo stars, Beers said. The relatively low discovery rate means that large telescopes, which are expensive to operate and highly competitive to obtain time on, are not ideal for this search.  A breakthrough in finding them came when Beers and collaborators decided to use moderate-sized telescopes aimed at brighter metal-poor stars, so they could observe many more targets. Once identified as r-process-enhanced stars, these targets could then be observed at higher resolution with larger telescopes.

After using this multi-pronged approach to identify more than 400 r-process-enhanced stars, the research team began asking where these stars were born, based on their dynamics. Their latest discovery will enable future research into models of how our Milky Way’s chemistry changes over time, based on how many such dynamical groups of r-process-enhanced stars are found.

“Going forward we won’t have 30 of these groups, but hundreds,” Beers said, which will allow more opportunities for discovery of a shared chemical evolution history among stars.

The research was funded in part from grant PHY 14-30152, Physics Frontier Center/JINA Center for the Evolution of the Elements (JINA-CEE), awarded by the US National Science Foundation.