A Speed Trap For Nuclei 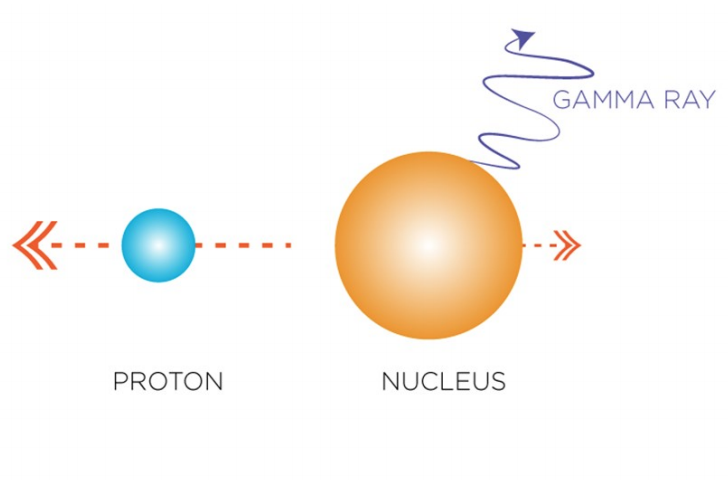 Measuring the energies of the neutrons emitted following beta decay is important for applications in nuclear energy and nuclear astrophysics. However, neutrons are notoriously difficult to detect directly because they are not electrically charged. A team including JINA-CEE scientists at National Superconducting Cyclotron Laboratory recently demonstrated a technique using Doppler shift that can determine the energies of these neutrons without detecting them directly [1].

A proton or neutron is often emitted following the beta decay of an exotic nucleus, giving the residual nucleus a “kick” in the opposite direction (see Figure). If the moving residual nucleus then emits a gamma ray, the frequency of the gamma ray should be Doppler shifted. This effect is similar to the change in pitch of sound waves heard from a vehicle that is moving toward versus away from an observer. Police use a radar gun that detects the Doppler shift of reflected microwaves to determine if a car is speeding.

The team of scientists observed the Doppler shifts of gamma rays due to proton emission following beta decay for the first time using the proton-rich nucleus, 26P. The magnitude of the Doppler shift provided a measure of the “kick” leading to a determination of the proton energy. Using protons provided a convenient test of the method because some of their energies had been measured directly before.

This method can be generalized to measure the energies of neutrons emitted following the beta decays of the neutron-rich nuclei that are important for nuclear energy and nuclear astrophysics. Considering how difficult it is to measure neutron energies directly, this technique is a welcome complement to existing methods. A challenge for the future will be to apply the method to higher-mass nuclei, which are more reluctant to budge when they emit a neutron.

The Doppler analysis was initiated as a Research Experience for Undergraduates (REU) project at MSU in the summer of 2013.