The Strongest Material in the Universe 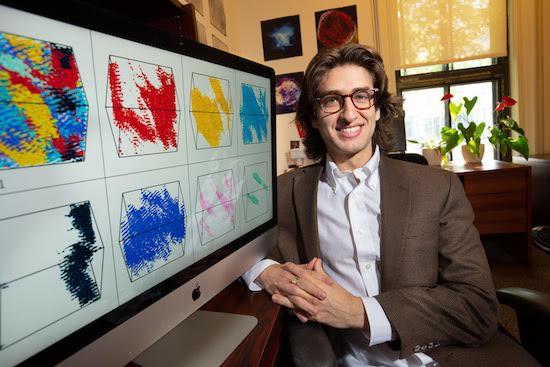 Neutron stars are the densest objects in the universe, and new research by JINA-CEE researcher Matt Caplan, a postdoc at the McGill Space Institute, now finds that they may contain the strongest material in the universe.

Formed when the core of a massive star implodes in a supernova, a neutron star is like a giant nucleus, with protons and neutrons squeezed so closely together that the mass of the sun fits in a space smaller than the island of Manhattan. But in many ways neutron stars are more like the Earth than a star. Their intense gravity creates enormous pressure which freezes their outer layers solid, giving them a solid crust over a liquid core. Since this crust is the part of the star astronomers can observe, it’s essential to understand its properties to probe the interiors of these extreme objects. On Earth, the strength of rock can affect the magnitude of earthquakes and the heights of mountains, and neutron stars are no different. The strength of the materials in the neutron star crust may affect similar phenomena. Crust breaking on neutron stars may produce electromagnetic radiation and strong materials may support mountains which, if large enough, could radiate gravitational waves.

In 2018, Caplan and collaborators published a paper in Physical Review Letters which includes the first ever calculations of the strength of the material at the base of the crust. A kilometer below the surface, the pressure is so great that nuclei get squeezed together and protons and neutrons rearrange into cylinders and sheets of nuclear material, named ‘nuclear pasta’ for its resemblance to spaghetti and lasagna. Caplan and his collaborators performed the largest ever simulations of nuclear pasta, containing over three million protons and neutrons, which took nearly 2 million processor hours to run. These simulations stretched and squeezed the pasta to calculate its strength and study how it breaks. They found that nuclear pasta is the strongest material in the universe, which makes it possible for neutron star crusts to have crustal mountains that are tens of centimeters high. While that may not seem like much, the incredible density of the neutron star crust means that these mountains contain far more mass than the Himalayas. If any nearby neutron stars have mountains this large, they could be radiating gravitational waves which LIGO and other gravitational wave observatories may soon detect.