Tracing the Origins of Stardust in the Nuclear Physics Lab 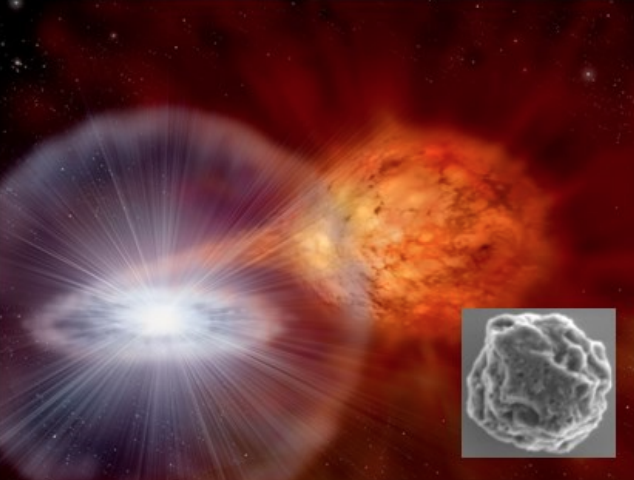 A team including JINA-CEE researchers working at the National Superconducting Cyclotron Laboratory (NSCL) on the campus of Michigan State University has discovered a short-lived nuclear state that boosts the destruction rate of phosphorus-30 via proton capture in a stellar explosion called a classical nova. This nuclear reaction, where a free proton combines with a phosphorus-30 nucleus, is critical to determining the origins of stardust in the form of presolar grains: microscopic rocks found inside of meteorites that predate our solar system and originate in the outflows of various stellar sources throughout the Milky Way.

Some presolar grains rich in silicon-30 may come from classical novae − thermonuclear explosions on the surfaces of white dwarf stars − but in order to determine their origin, the rate of phosphorus-30 destruction via proton capture must be known precisely and compared to the rate of destruction via beta decay into silicon-30. To date, this rate has been difficult to quantify experimentally because the properties of the nuclear states potentially enhancing the proton capture have been uncertain.

To cast light on this 5-billion-year-old question, the researchers at NSCL recently carried out an experiment funded in part by JINA-CEE, in which they observed and characterized a new short-lived state involved in the reaction. They found that the new state might in fact dominate the destruction rate of phosphorus-30 [1]. This is an important step toward determining whether “presolar nova grains” indeed come from novae.

This experiment and subsequent analysis are the subject of the thesis project of JINA-CEE graduate student Michael B. Bennett of Michigan State University.