Using a nuclear accelerator to hunt for exoplanets? 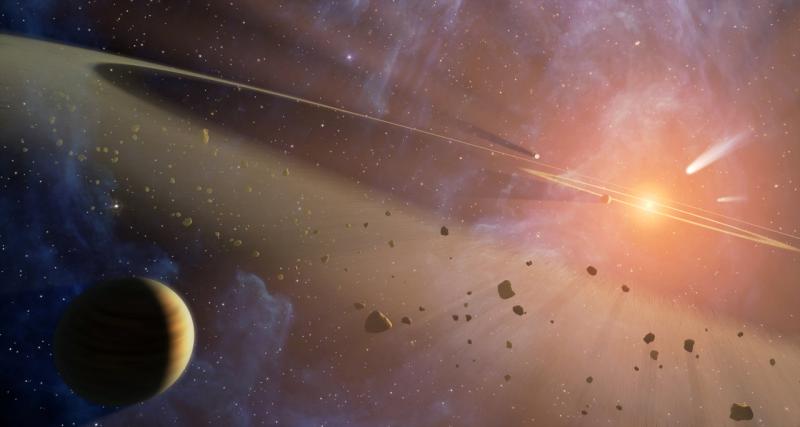 Yes, nuclear astrophysics can contribute to the hunt for Earth-like exoplanets by, for example, determining abundances of key radionuclides responsible for planetary radiogenic heating. 40K is one such case, whose slow beta decay helps keep a planet’s mantle hot for the billions of years following its birth. Knowing how much 40K is present at the time of the planet’s formation is crucial for the models that are currently employed for the study of radiogenic heating in exoplanets. In a new JINA-CEE study, researchers from Central Michigan University and Ohio University teamed up to measure the destruction rate of 40K via the 40K(n,p)40Ar reaction.

Radiogenic heating, i.e. heating produced by exothermic decays of radioactive nuclei, affects the geological activities of a planet and has implications for the development of a habitable environment on its surface [1]. With a half-life of 1.248 x 109 years, 40K is one of the most important naturally occurring radionuclides that are responsible for the radiogenic heating of Earth-like exoplanets. Depending on the age of the planet and the chemical evolution of its galaxy, 40K can be the dominant heat-producing radionuclide in its mantle [2]. To predict the initial concentration of 40K in the mantle, and subsequently the thermal evolution of the planet, we currently rely on Galactic Chemical Evolution models.

"Our study aims to provide necessary data to improve the accuracy of the calculated stellar yields of 40K, an important input parameter for these models" - said experiment leader Panos Gastis, who recently obtained his PhD from Central Michigan University.

40K is synthesized during stellar evolution both via fusion reactions (during Oxygen burning) and via s-process nucleosynthesis. At the same time, it is destroyed through the 40K(n,p)40Ar and 40K(n,α)37Cl reactions. In this study, researchers constrained for the first time the destruction rate of 40K through the 40K(n,p)40Ar reaction, by measuring the reverse  40Ar(p,n)40K reaction. The experiment took place at the Edwards Accelerator Laboratory at Ohio University, using a proton beam and a 40Ar target.

The results show that the destruction rate of 40K in massive stars via the 40K(n,p)40Ar reaction is larger compared to previous estimates. In particular, for temperatures suitable for stellar nucleosynthesis, the experimentally constrained rate is up to 40% higher than the suggested theoretical rate in the JINA-REACLIB library (see Fig. 1). The new rate is determined with an uncertainty of about 15%, which is significantly lower than the typical uncertainty of 100% (factor of two) of the theoretical reaction rates from statistical model calculations in this mass region.

"This is an excellent example of how studies in nuclear physics can spin-off advancements in other fields. In this DOE funded work, we originally studied this reaction to prove that we will be able to constrain (n,p) reactions using their inverse (p,n) reactions at FRIB, and, as a bonus, we are now branching out to an exciting new field that connects nuclear physics, astrophysics, and geology! Such interdisciplinary connections are what JINA-CEE is all about!” - said the study's PI George Perdikakis of Central Michigan University.

These findings are expected to help reduce the associated uncertainties on the calculation of stellar yields for 40K [3] and improve the accuracy of the radiogenic heating models currently used to identify exoplanets that could support life.