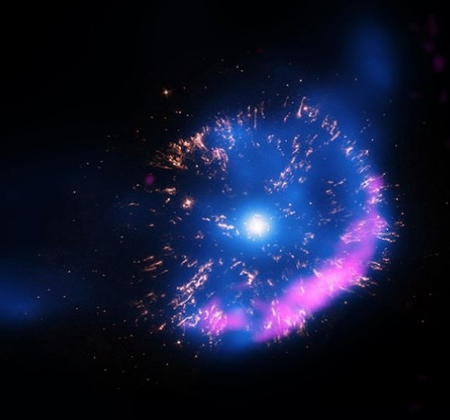 Modeling the collapse of massive stars and their explosive demise as supernovae is a scientific challenge. Despite major collaborative efforts by researchers across diverse fields, there are still many open questions related to core-collapse supernovae, e.g. how the collapse evolves into the explosion and how supernovae contribute to the synthesis of elements and the chemical evolution of the galaxy.

To make progress in understanding core-collapse supernovae, a close collaboration between astrophysical observers, modelers, nuclear theorists, and experimentalists is required. Simulating the evolution of the star in its final stages, requires that modelers use accurate nuclear physics inputs. Electron-capture reactions on medium-heavy nuclei, which are mediated by the weak nuclear force, play an important role in the dynamical evolution of the collapse of a massive star and the development of the shockwave that initiates the explosion.

Electron-capture reaction-rates on hundreds of nuclei must be known for accurate simulations. Direct measurements of these rates under hot and dense stellar conditions is impossible, but they can be derived from so-called data obtained from experiments that utilize charge-exchange reactions. Charge-exchange experiments are only possible for a limited set of nuclei, but they serve to benchmark and guide the development of state-of-the-art theoretical calculations, which can then be used to estimate the electron-capture rates for many other nuclei.

The charge-exchange group led by JINA-CEE senior investigator Remco Zegers at NSCL performs charge-exchange experiments and collaborates intensively with nuclear theorists to validate relevant theoretical calculations. These combined efforts have led to the creation of a library of weak reaction rates, which can be used by astrophysicists in their simulations. The library, which combines various sets of electron-capture rates based on different theoretical approaches that are benchmarked by experiment, was built by NSCL graduate student Chris Sullivan and integrated into the neutrino-interaction library NuLib, developed by Evan O’Connor (NSCU).

In close collaboration with Evan O’Connor, Chris used the library in a study aimed at testing the sensitivity of the evolution of core-collapse supernovae to uncertainties in the electron-capture rates. This sensitivity study was performed in a one-dimensional simulation of the collapsing star using the code GR1D. The simulations are important for understanding the uncertainties in the evolution of supernovae due to uncertainties in the electron-capture rates, to guide experimental work at NSCL and in the future at the Facility for Rare Isotope Beams (FRIB), and to improve the weak-rate library.

The creation of the weak-rate library and the sensitivity study was performed within the framework of JINA-CEE. Since the simulation of other important astrophysical phenomena, such as thermonuclear supernovae and accreting neutron stars, also require accurate weak reaction rates, the weak-rate library will have strong benefits to the broader astrophysical community.